THE INDEPENDENT - The Diagnostic and Statistical Manual of Mental Disorders has been updated but should we beware this manual's diagnosis? 8TH May 2013 - Courtesy of the Independent website 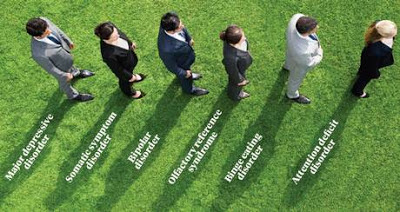 The Diagnostic and Statistical Manual of Mental Disorders has been updated but should we beware this manual's diagnosis?

The book which gives doctors a checklist for mental illnesses – as made famous by The Psychopath Test – has been updated. But does it really work?


Next month, the latest edition of a book will be published in America that, according to its critics, will give you a starring role in your own private performance of One Flew Over the Cuckoo's Nest – by turning aspects of your normal behaviour, such as checking Twitter a little too often, into a new mental disorder.


Many see its publication as part of a continuing attempt to create order out of the chaos of the human mind by updating a set of common criteria for mental disorders that encourages research as well as helping in the diagnosis and treatment of patients.


Yet the debate is so polarised that the American Psychiatric Association (APA) is publishing the $200 fifth edition of the Diagnostic and Statistical Manual of Mental Disorders (DSM) into a maelstrom of controversy. Indeed, two of the DSM's fiercest critics, Dr Allen Frances and Dr Robert Spitzer, are former chairmen of the task forces that composed previous editions.


Now, just two weeks before the new edition appears, the National Institute of Mental Health, the world's largest mental health research institute, has announced that it is withdrawing support for the manual as "it lacks validity" due to the unscientific basis of its classifications.


The DSM classifies psychiatric disorders and provides a checklist of symptoms for each separate disorder. The first edition was published in 1952 following research by the US military during the Second World War; since then there have been three more revised editions, the last 20 years ago: the fifth is due out on 31 May. The DSM has grown substantially in size: from 130 pages and 106 mental disorders in 1952 to 492 pages and 265 disorders in 1980. And it is expected that the new DSM-5 will be even larger.


An alternative – and free – publication, International Statistical Classification of Diseases (ICD), issued by the World Health Organisation, provides an official international classification system of mental illness that the DSM sometimes borrows. The ICD is used in Europe for clinical treatment in preference to the DSM and without the lurid headlines. The DSM, though, is increasingly influential on our way of thinking about mental health.


For writer and broadcaster, Jon Ronson (pictured right), attitudes to the DSM "have changed". Ronson's bestselling book, The Psychopath Test, has helped to bring the DSM to the attention of a UK audience.


"When DSM first came out people were really excited. There was something alluring about it because people loved nothing more than mental health checklists. It was also a change from the pseudoscience that had gone before."


Now people hate it for the same reason. "They feel that there is an ivory tower elite trying to turn normal human behaviour into disorders and they don't want to be told what they are feeling isn't normal."


The former chairman of the work party for DSM-IV, Dr Allen Frances, was once one of this elite, and he is clear why he is not looking forward to the new edition of the DSM. He believes it threatens to unleash what he has called a "diagnosis hyperinflation" by "greatly expanding the number of people considered mentally ill, and reduces the ranks of the normal".


For Chris Lane, a case in point is the transformation of Social Anxiety Disorder from something that did not "formally exist" before the 1980s to what Psychology Today called "the disorder of the decade in the 1990s". Lane is author of Shyness: How Normal Behaviour Became a Sickness, and to write the book he was given access to the DSM archive of unpublished material.


In 2010, more than 24.4 million prescriptions for generic formulations of Prozac were filled in the US alone, yet the two psychiatrists who had first identified Social Anxiety Disorder in the late 1960s, Isaac Marks and Michael Gelder, were adamant in calling it "rare and mostly innocuous". They were "steamrolled over".


Dr David Kupfer, chair of the DSM-5 taskforce, unsurprisingly, does not think DSM-5 is about redefining what is normal.


"DSM has been periodically reviewed and revised since it was first published in 1952. The previous version of DSM was completed nearly two decades ago; since that time, there has been a wealth of new research and knowledge about mental disorders that is not reflected in the current [DSM-IV] text."


In DSM-5, the revisions to autism spectrum disorder and substance use disorders are particularly important, he believes.


However, he accepts that "criticism is an inherent part of any robust scientific discussion".


"It is understandable that patients and their loved ones would feel impassioned about ensuring that people with mental disorders are diagnosed accurately and correctly. So at every step of development, we sought to make the process as open and inclusive as possible and did so to a level unprecedented for any area of medicine."


As a result, more than 13,000 comments on the proposed diagnostic criteria were received and reviewed.


For professor Michael Owen this consultation made the process "so conservative" that "many possible changes were not incorporated". Owen is a psychiatrist and researcher from Cardiff University's School of Medicine, who has been involved in putting together DSM-5, and has been at the forefront of looking at the genetics behind mental illness.


The polarisation of the debate, he accepts, comes in part "from the fact that in recent years many, milder conditions such as mild depression, anxiety and stress" have come under the "remit of medicine" and without a better understanding of the mechanism of psychiatric diagnosis "the designation of something as a psychosis sometimes seems unacceptably arbitrary".


"There are better arguments for demedicalising these than for severe disorders such as schizophrenia, bipolar disorder or autism."


However, Owen feels strongly that the suspicions of some critics that Big Pharma is somehow "in cahoots" with the APA are wrong. "I saw no evidence of this in DSM-5."


In fact, he says "we need them if we are to have new treatments. Unfortunately many of the major companies are leaving the neuroscience area because they see it as unprofitable."


But Peter Tyrer, interim head of the Centre for Mental Health at Imperial College London, thinks there may be some truth to the criticisms of diagnosis inflation. Tyrer jokes that "DSM" really stands for "Diagnosis as a Source of Money, or Diagnosis for Simple Minds", since all profits go to the APA and it can encourage a tick-box approach to diagnosis.


More seriously, he believes that the problem is that it is a "precocious adolescent" that dominates psychiatric classification.


The issue is that there is "no biological basis" for the classifications so "their status is pretty dodgy", and this has led, Tyrer believes, "to allegations of over-diagnosis", reinforced by drug companies pushing for new diagnoses that allow them to promote their products.


In the end, this could be the last edition of the DSM as we will no longer need checklists to define who is not normal.


Although professor T W Robbins, from the Behavioural and Clinical Neuroscience Institute at the University of Cambridge, believes that the DSM "will still be a useful clinical instrument when DSM-5 is launched". Indeed without it, he says, there would be "chaos".


"Much of the future will depend on advances in neuroscience, including cognitive neuroscience".


"It is particularly important to identify 'endophenotypes', which are more accurate descriptions of deficits in such functions as the processing of reward and punishment, the ability to make rational and also empathic decisions, and the ability (in certain contexts) to inhibit inappropriate automatic and habitual behaviours."


If this happens along with understanding how they go wrong in mental disorders, then the future debate may be less about defining normality, and more about how far should we go.


"It will enable us to detect disorders in the vulnerable, at-risk state and treat or intervene with drugs or cognitive therapy before the damage is done," says Robbins, "as once things start going wrong they are much harder to treat".