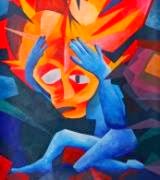 About the Author: Dr. Deborah Serani is a go-to media psychologist and an award-winning author. She is also an associate professor at Adelphi University where her research interests are in depression and trauma. Her new book Depression and Your Child: A Guide for Parents and Caregivers" is available online and in book stores. Follow on Twitter @DeborahSerani.
Posted by dave traxson at 14:29 No comments:


Today it seems that almost everyone is certifiably mad. According to critics, amateur and professional psychiatrists are routinely guilty of "diagnostic inflation": turning normal people into mental patients with alphabet soup diagnoses. In a new book, America's Obsessives, author Joshua Kendall argues that many great people have been shaped by obsessive compulsive personality disorder.
Other widely applied questionable labels include disruptive mood disregulation disorder, which may mean nothing more than children's temper tantrums, and social anxiety disorder, which may be shyness. Thanks to psychiatric overreach, every quirk is judged a mental disease, especially if the US$300-billion-a-year pharmaceutical sector has a pill for it, the theory goes.
Meet florist Caren Ragan, who says she has taken every psychiatric test under the sun. Much mental health diagnosis is subjective, Ragan says.
Her mental health ordeal stemmed from declaring her intention to divorce her ex-husband who, at the start of a 10-year court battle, branded her "paranoid-delusional", she says. Six times during her ordeal, Ragan took one of the most commonly used personality tests in mental health: the Minnesota Multiphasic Personality Inventory.
Her answers were consistent, she says, but the diagnosis depended on the examiner. The verdict varied from "normal" to severe psychosis with paranoid delusions. "Which was pretty strange considering I worked, raised a family and volunteered at school and not one single person ever noticed this severe mental disorder," she says.
Ragan adds that she was prescribed several kinds of anti-depressants for real, related depression; all worked briefly before she decided she had no time to indulge in emotional problems, which are a luxury of rich countries, she says.
In the developed world, the mental health industry is booming. According to psychologist Carole Stovall, an expert in anxiety complaints such as post-traumatic stress disorder, mental health prescription rates have "skyrocketed".
Stovall is appalled that doctors prescribe psychotropic drugs to children as young as six months. "This is shameful. Clearly, society is over-prescribing," she says. True, she adds, careful medication can help a patient. But medication is often used "off-label", which can be detrimental. All medication has side effects, she says.
In fact, medication can make you crazy. According to the mental health watchdog the Citizens Commission on Human Rights, common and well-documented side effects of psychiatric drugs include mania, hallucinations, depersonalisation, suicidal ideation, psychosis, heart attack, stroke and sudden death.
The view that psychiatrists recklessly medicate first and ask questions later, pathologising normality, is fuelled by an oft-cited Canadian study. Children born in December, close to the cut-off date for entry into British Columbian schools, were 39 per cent more likely to be diagnosed with attention deficit hyperactivity disorder (ADHD) than children born 11 months earlier, the study found.
The University of British Columbia researchers deduced that younger students were diagnosed with ADHD because of their youth. The finding suggested that the education system is medicalising immaturity.
According to the leading critic of diagnostic inflation, Allen Frances, we can cope with plenty of pain because the brain is naturally resilient and self-healing - given time, people get through rough patches.
Newly invented conditions such as "major depressive disorder", which is grief in Frances' view, worsen a cruel mental health industry paradox: people desperately needing help wilt unaided while the "worried well" win the bulk of the treatment, often to their detriment, says the blurb for Frances' book, Saving Normal.
Defenders of labelling, including the influential clinical psychiatry professor Ronald Pies, contest that it draws flak for a suspect reason: society fears, misjudges and reviles mental illness, he claims.
According to City University of Hong Kong social scientist Daniel Wong, speaking in a 2011 BBC interview, mention of mental illness makes people think of danger and murderous violence. So, some of the doubt about diagnosis may stem from prejudice.
Therapist Peggy Tileston reckons that the psychiatric profession merits some credit.

"I have witnessed much good, including lives literally saved, lives turned around for the better, resulting from conscientious, caring and skilled psychiatrists accurately diagnosing and prescribing appropriate types and levels of medication for people with serious mental health conditions," Tileston says.
Still, she has qualms. While we no longer shut people away in deplorable asylums, we still have a long road ahead.
"We still know so little about the vastness of who we are as human beings. It's very quick, convenient, clean and comforting to organise, categorise, and standardise human experience," she says. "But we cannot and should not reduce our messy and multidimensional human experience to a checklist of symptoms and behaviour.
"The danger is that we miss the unique person sitting right there in front of us, or we see only what's wrong and different from the norm," she says.
Cue medication. A diagnosis and a pill or product now exists for almost any human experience, according to Tileston. "Have a human condition that makes you or me uncomfortable? There's a pill for that!" she says, adding that over-diagnosis discourages accepting what being fully human means.
The reason for the alleged clinical bias is a growing group intolerance towards any experience outside an increasingly narrow range judged "appropriate" or "normal", Tileston says.
She approvingly quotes a patient who told her: "Normal is a setting on a washing machine, and not applicable to creative individuals like me."

This article appeared in the South China MorningPost print edition as Diagnostic inflation: when quirks label us as crazy
Posted by dave traxson at 13:50 No comments: