DSM-5 DEBATE : Is Criticism Of DSM 5 'Antipsychiatry'? No: It is trying to save psychiatry from DSM 5. Courtesy of PsychologyToday website 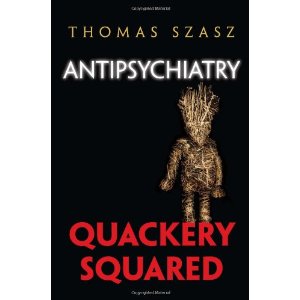 
Is Criticism Of DSM 5 'Antipsychiatry'?

No: It is trying to save psychiatry from DSM 5.

The American Psychiatric Association has never once addressed the substantive questions raised about DSM 5. Instead, it has always followed the Public Relations recommendation to endlessly repeat the same meaningless mantra that many experts worked hard on DSM 5, that it reflects the latest in new science, and that it was the most open process ever.


When more than fifty mental health associations requested an independent evidence based review of the controversial new proposals in DSM 5, APA brushed them off. Whenever the DSM 5 leaders and I have been invited to debate, they always refuse to meet face to face and to discuss the issues point by point. Their 'talking points', deaf ear, circle the wagons approach has deprived DSM5 of a much needed opportunity to self correct before its rushed publication.


The latest in APA's fluffy public relations has come from the president of the American Psychiatric Association. He has made two astounding claims- that criticism of DSM 5 is somehow equivalent to criticism of psychiatry and that it signifies stigma against mental illness. http://t.co/Z4UOMbYaRp


Patrick Landman, a prominent French psychiatrist who has written an excellent book on DSM 5, wrote this rousing response to this new APA PR offensive:


"Let's be clear- to oppose DSM 5 is not to oppose psychiatry. Recently, the APA leadership has been portraying all opposition against DSM 5 as a form of antipsychiatry. This is nonsense."


"Such rhetoric aims to discredit critics so that DSM 5 does not to have to respond to their serious and well-documented arguments."


"Opposition to the DSM 5 methods and changes comes from all over the world and includes tens of thousands of psychiatrists, clinical psychologists, counselors, social workers and other mental health practitioners."


"The people who oppose DSM 5 belong to many different schools of thought, but unite in the worry that it is not safe or scientifically sound. We are all deeply invested in psychiatry and cannot by any stretch of the imagination be seen as anti-psychiatry. Indeed, we are trying to save psychiatry from the errors of DSM 5."


"The stigma issue is equally a red herring. We are deeply concerned with the dignity and rights of all users of psychiatry and committed to the struggle against all forms of discrimination against the mentally ill."


"Most who oppose DSM 5 do not reject the classification of mental disorders. We consider it essential for epidemiology, research, and clinical work. What we do contest is the specific reliability, validity and usefulness new DSM 5 diagnoses and also the closed and disorganized way in which it was prepared."


"Even those critics of DSM 5 who question its reductionistic biomedical model do not question a biological contribution to mental disorder. They are in favor of real scientific breakthroughs, but refuse to accept a purely biological ideology. They do not reject the use of medication when it is useful to bring about a patient’s remission or recovery."


"Finally, saying that the DSM-5 will lead to over-diagnosis and over-medicalization of forms of behavior which for the longest time have been perceived as part of normal human variation (such as mourning) and that the DSM-5 will trigger new false epidemics and lead to inappropriate drug prescriptions which may turn out to be dangerous (especially in children) has nothing whatsoever to do with antipsychiatry but rather accords with common sense and … yes, the defense of psychiatry."


Thanks, Professor Landman. It would be wonderful to watch you debate the APA president on this question- whether opposition to DSM 5 is really pro psychiatry or anti psychiatry. We can safely bet who would win, but also that such debate will never happen. APA Public Relations would never approve it.


So look for a continued flow of desperate APA puffery- and don't be surprised by the lack of DSM 5 substance. It is impossible to defend the indefensible.