Anti-depressants linked to increased suicide risk in teens due to them raising energy levels before they lift mood in initial stages. - Courtesy of the NHS Website 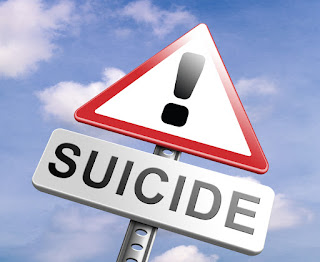 
"Antidepressant use doubles the risk of suicide in under 18s and the risks to adults may have been seriously underestimated," The Daily Telegraph reports.
A review of clinical study reports compiled by drug companies also suggests that risks may have been under-reported. Clinical study reports usually have more detail than the summaries of published trial results.
Researchers analysed 70 studies which looked at five antidepressants.
They looked specifically at the reports of deaths, suicides, suicidal thinking or suicide attempts, aggression, and a type of extreme restlessness called akathisia.
The results showed that children taking antidepressants had a higher chance of suicidal thoughts or suicide attempts, and of aggression. None of the children in the studied died. Adults in the studies did not have an increased risk of these problems.
The finding that children and young people are more likely to think about or attempt suicide while taking antidepressants is not new, and has been known for more than a decade.
The study authors criticised the small amount of data on harms available, and the way it was presented. They say this makes it difficult to calculate the true chance of harm from antidepressants.
It is a potential concern that harms may have been under-reported by pharmaceutical companies. Only full disclosure of evidence can provide us with an accurate profile of both the risks and benefits of a treatment.
No-one should stop taking an antidepressant suddenly as a result of this study. If you are concerned about the risk of side effects, see your doctor. Stopping antidepressants suddenly can be dangerous.

Where did the story come from?

The study was carried out by researchers from the Nordic Cochrane Centre and the University of Copenhagen, and was funded by the Laura and John Arnold Foundation. The study was published in the peer-reviewed British Medical Journal (BMJ) on an open-access basis, so it can be read for free online.
The UK’s media reports focused on the potential increased risk of children becoming suicidal, seemingly unaware that this is a long-established risk. The Daily Telegraph blurs the findings, with its headline reporting that "Antidepressants can raise the risk of suicide," without making it clear that this only applies to under-18s.
Most of the headlines failed to make clear that the increase in suicide risk, while statistically significant, was small.
These criticisms aside, the general quality of the reporting was good, with many useful quotes from independent experts.

What kind of research was this?

This was a systematic review and meta-analysis of randomised controlled trials (RCTs) of antidepressants.
This is usually the best type of study for establishing the effects of drugs. However, a systematic review is only as good as the studies that go into it.

What did the research involve?

Researchers looked at detailed information for all RCTs of antidepressants in the classes of selective serotonin reuptake inhibitor (SSRI), including fluoxetine and paroxetine, or selective noradrenaline reuptake inhibitor (SNRI), including venlafaxine.
They included any studies that had information on harms to individual patients (as opposed to just summaries of harms). They worked from clinical study reports, which usually have more detail than the summaries of trial results published. Clinical study reports are submitted to regulatory authorities prior to a drug being granted a license.
The researchers pooled the data from the studies to see how common certain harms were in people who had taken the study drug, compared to people who had taken placebo. They then looked separately at the results for people under and over the age of 18.
Using these results, they calculated the risk of four specific harms from taking the antidepressants studied: death, suicidality (meaning suicidal thoughts, suicide attempts or self-harm), aggression and akathisia (an unpleasant sense of restlessness and agitation, which has been described as "feeling like I wanted to jump out of my skin").

What were the basic results?

When they looked at the risks separately for adults, they found no increased risk of any of the outcomes.

How did the researchers interpret the results?

The researchers said that many of the studies did not clearly report harms from treatments, and that some were misclassified or described as something else (for example, "suicidal thoughts" were sometimes classified as "worsening depression"). Because of this, they say, "The true risk for serious harms [from antidepressants] is still uncertain. The low incidence of these rare events and the poor design and reporting of these trials makes it difficult to get accurate effect estimates."
The researchers report that in several instances, deaths were misclassified as happening after the end of the trial, even though they were still within the trial's timespan. They also question whether the side effect of akathisia is under-reported, because in some trials the term did not appear at all, suggesting that it is being classified as something else.
They suggest "minimal use" of antidepressants in children, adolescents and young adults, and that people in these age groups should be offered alternative treatments, such as exercise and psychotherapy.

Perhaps the most troubling aspect of this paper is not the increased risk of suicidal thoughts in young people, as that has been known for many years. What is worrying is the researchers’ conclusion that they are unable to tell the true extent of harms from antidepressants, because of poor data collection and availability.
RCTs are designed to test the effects of treatments with as little bias as possible. However, if the right data on adverse effects is not collected in the trials, or is not made public, we cannot balance the benefits and risks of treatment in a fair and transparent way.
According to the data we do have, it is likely that for many people, the benefits of antidepressant treatment will outweigh the risks. The situation is different among under-18s, as doctors have known since 2004, when warnings against using certain antidepressants in children were issued.
Guidelines on the treatment of depression in children say antidepressants should only be considered for children with moderate to severe depression if psychological (talking) therapy has not helped, and after a specialist review and discussion with the child and their family. In this instance, only fluoxetine is recommended.
It is worth repeating that it can be dangerous to stop taking antidepressants suddenly. Some people get a withdrawal syndrome, which can make depression much worse. If you are worried about taking antidepressants, or feel they are not helping you, make an appointment with your doctor.
If you or anyone you know feels like harming themselves or is considering suicide, you can call The Samaritans on 116 123 any time, in complete confidence. You should also seek medical help immediately.
Analysis by Bazian
Edited by NHS Website
Posted by dave traxson at 09:52 No comments:

PLEASE SHARE IF YOU AGREE
Posted by dave traxson at 16:21 No comments:

Risperidone risks rocket in the U.K. following law suit in the U.S. for 'Criminal Injury.'

In a news conference announcing the settlement, Eric H. Holder Jr., the United States attorney general, said the company’s practices“recklessly put at risk the health of some of the most vulnerable members of our society — including young children, the elderly and the disabled.”

Posted by dave traxson at 18:30 No comments:

SAFEGUARDING A CHILD FROM HARM IS OUR 'PARAMOUNT DUTY OF CARE.' 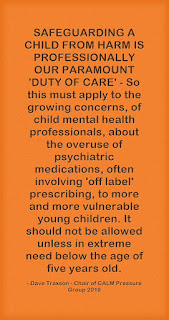 Posted by dave traxson at 18:09 No comments: