Teachers and all professionals working with children should monitor the use of psycho-active medications like Ritalin as part of their safeguarding duties, says leading Child and Educational Psychologist Dr Brian Apter.


Adi Bloom
Teachers should monitor the use of medication like Ritalin as part of their safeguarding duties, says British Psychological Society
https://www.tes.com/news/school-news/breaking-news/using-adhd-drugs-control-non-compliant-pupils-inhumane-say-experts?amp&__twitter_impression=true
The use of ADHD drugs like Ritalin to control "non-compliant" pupils is “politically totalitarian, physiologically inhumane” and reminiscent of Stalin’s Russia, leading educational psychologists have said.
They add that such treatment should be considered the safeguarding responsibility of all professionals involved in the affected child’s care – including teachers.
The British Psychological Society’s division of educational and child psychology has produced a paper outlining its position on the use of drugs to treat attention deficit hyperactivity disorder (ADHD).
The paper states: “If we had read…that children in Stalin’s schools…were being forced to take mind-drugs that made them compliant in school, we might have been indignantly outraged, morbidly fascinated but unsurprised.
“If the only symptom of a child’s ADHD is their non-compliant and irritating behaviour, then control and compliance at home and in school achieved using drugs might also appear politically totalitarian, physiologically inhumane, a serious safeguarding issue, and in contravention of basic human rights and freedoms enshrined in international law at this time.”

The paper argues that there are no valid measures or baselines for hyperactivity, impulsivity and inattention.
The educational psychologists therefore say that they are deeply concerned about the diagnosis and treatment with psychotropic medication of young children. They say that no child under the age of six should be prescribed drugs such as Ritalin.
And older children should only be given these drugs if they have provided informed consent to the treatment, they add.
“Such treatment must be considered a primary safeguarding responsibility of all involved professionals,” they state.
In addition, they argue that the use of such medication to control pupils’ behaviour, when that behaviour is not causing the affected pupils any distress, would be an infringement of their human rights.
“Put plainly, using…psychotropic medication to coerce, control or manage a child or young person’s behaviour, just because they were uncompliant with institutional rulesor an adult’s instruction would be ethically unacceptable,” they say.

They argue that there is a “subtle but pernicious educational and psychosocial side-effect” of medicating children for ADHD: it implicitly teaches them that “their behaviour problems are beyond their responsibility and agency, and only drugs can help them”.
They therefore conclude that there are immediate and long-term risks from such medication. “Medication should be a last resort, after psychological and educational interventions have been properly tried,” they state.
Posted by dave traxson at 12:32 No comments:

Challenging the Saddening Relentless Rise in Depression in Young People in the U.K.

Challenging the saddening relentless rise of depression in our young people in Britain today and its consequences. 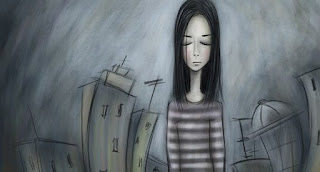 FOR FULL LINKEDIN ARTICLE CLICK ON THIS LINK:
https://www.linkedin.com/pulse/challenging-saddening-relentless-rise-depression-our-young-traxson/?trackingId=KX8W%2FQNySw1S%2FJx4%2BmUKcA%3D%3D

Most surveys of young peoples’ psychological wellbeing and mental health over the last two decades show a sharp rise in indicators of depression and sleep disturbance which may in itself be a contributory factor along with heightened levels of social isolation and social anxiety. h has raged for decades there is very rarely a simplistic answer or cause for many issues but especially a young person’s state of mind at a crucial stage of development. Multi-causal explanations are much more likely to explain the situation better. 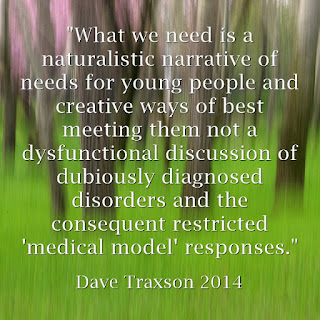 There are many drivers is not possible for all of this increase to be accounted for by an epidemic of a biologically based condition. As we know from the ongoing ‘Nature - Nurture Debate’ which in society, after at a period of long-term Austerity, for all or most young people which may impact on their state of mind, stress levels and the likelihood of harm to their overall mental health and wellbeing. Some of these will be the pressures for academic success to ensure employment which has been a huge issue for a decade; their need to conform to stereotypes of gender, beauty, and their chosen subculture; the increase in bullying behaviour with the advent of cyber-bullying which aggressively invades their private world and bedrooms; and the western obsession with wealth, the burgeoning celebrity culture and the perceived need by young people for the latest must have accessories from phones and clothes to cars and expensive holidays. Any perception of a shortfall on any of these can be a major factor in the young person’s deteriorating feelings of belonging, self-worth or having mental health difficulties. Then there are other significant factors like loss and bereavement which are bound to have a negative impact but with the right support a young person will cope better with it and certainly the young person is not mentally ill for feeling the way they do naturally.
Another crucial factor is that some young people are much more resilient and can bounce back from adversity better, some having better support groups or circle of friends around them which can be a major protective factor for mental health. Likewise some young people will find better outlets for their frustration with the world such as using physical activity which is proven to be very effective at inoculating them from depression as shown in recent articles in medical journals like the Lancet.
This complex pattern of factors is totally personal to the individual and differing formulations will lead to unique responses in the individuals we are concerned about. One thing that is certain to Educational Psychologists is that there will be no ‘quick fix’ either individually or collectively for these woes. Indeed people thinking that anti-depressant medication is the answer are also left floundering in a sea of misinformation and poor quality research findings where successful outcomes have been systematically ‘cherry picked’ to boost the sales of the drug company’s profitable products. There is also the fact, as illustrated by the ‘black box warnings’ on drugs in the States issued by the Federal Drug Agency that initially some SSRI anti-depressants can double the risk in the short term period, of two months, of suicidal thinking and action. This is because they raise the young person’s energy level before they raise their dark mood thus being implicated in some of the mass shootings we are witnessing where recent changes in drug treatment may have been a factor such as in the infamous Columbine School incident. In young men in Britain between 18 - 25 today suicide is sadly the highest cause of death for that age group which is a national tragedy alerting us to complex causation of the problem.
Many mental health professionals are now actively questioning the previous generations collective wisdom of there being a ‘chemical imbalance’ in the brain. Senior researchers from highly respected bodies such as the National Institute of Mental Health, the largest mental health research organisation in the world have come out and said that there is a lack of concrete research evidence that proves this assertion over the last forty years of actively seeking it which is a major cause for concern for its credibility. 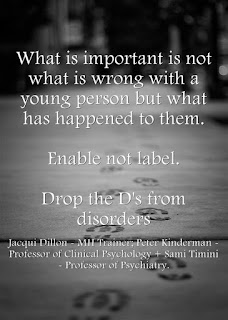 So the depressing conclusion is that there are few certainties in the field of depression and how it develops at times of crisis like now. All we know is that there are many contributory factors for each human being and that humanistic or naturalistic interventions have the chance of being equally as successful as bottles of pills.

To end with a quote from Johann Harri in his new book published today,”If you are depressed and anxious, you are not a machine with malfunctioning parts. You are a human being with unmet needs. The only real way out of despair is for all of us, together, to begin to meet these needs for deep connection, to the things that really matter in life.”The book is’”Lost Connections: uncovering the real causes of
Posted by dave traxson at 09:57 No comments: