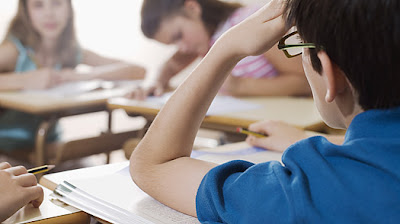 CLICK ON LINK ABOVE TO GET SIMILAR TIMES MAGAZINE ARTICLE

Children learn better when they can move their hands, says research

Children who fidget with their hands in class learn more quickly than those who stay still, say researchers.

Psychologists found that children who could move their hands around freely were better at learning than pupils who were not allowed to move.

They believe that hand movements and gestures can help children to think, speak and learn.

The research on primary school children was carried out by academics at the University of Hertfordshire.

The study examined the differences in learning when children were able to move around their hands and when they were forced to keep their hands still - by putting them into a pair of mittens attached to the table.

The psychologists found that when children were able to move their hands they were more likely to be able to find the correct answer - particularly when it was a case of trying to recall a word on "the tip of their tongue".


Far from restricting children from moving their hands, if teachers encouraged more fidgeting in class they might find children actually learn more.

The children, aged six to eight, had been asked to name objects in pictures - and the researchers found that using their hands to gesture helped children to "find the right word".

"People often think we gesture to help others understand what we are saying. But in fact gestures help us find the right words," said researcher Karen Pine.

"We also know they can help children think and are important for problem solving and speaking.

"Children who fidget in class can be an annoyance for teachers. Many cope by telling children to sit on their hands or keep absolutely still in class, but our research has shown that they need their hands free so that they can gesture."

The research, by Dr Pine, Hannah Bird and Liz Kirk, was funded by the Economic and Social Research Council.
Posted by dave traxson at 06:41