British Psychological Society lends it support to the call for a national review of psychotropic drugs for children. My call for a national review of psychotropic medication for school aged children for behavioural issues, in the TES article, “Mind altering drugs used to ‘treat’ shyness, says psychologist,”(21.02.2011) bore fruit last week when the chairpersons of the Clinical and Educational Divisions of the British Psychological Society lent support to this call. Peter Kinderman chair of the Clinical Division of the Society, that monitors the ethical and good practice of its members, stated in a press release dated 9th February 2011, “Clearly, it is important to understand children’s behavioural and psychological problems fully, and to invest in proper, expert, therapeutic approaches. We would be very concerned if children were being prescribed medication as a quick fix rather than accessing the full assessments and psychological therapies which take may longer and cost more, but ultimately are likely to be better value in the long run.”  “Many psychologists are very concerned at the use of psychiatric and medical diagnoses in cases such as this – not only because of doubts about the validity of many of the diagnostic approaches, but also because of the possible adverse effects of the medication. Children for whom the diagnosis of ADHD is being considered should receive full multidisciplinary assessments, the option of receiving psychological and behavioural therapies, and their parents or carers should be offered parent-training and education programmes.”   “Within the BPS we are already working closely with our psychiatry colleagues to ensure better mental health across the board. If there is evidence of inappropriate use of drugs or medication then we’re sure that our psychiatry colleagues  would be equally concerned.”I am naturally delighted with the support for a national review about the safeguarding issues involved in overmedicating school children. We must act quickly prior to the release of DSM5 ,the new diagnostic ‘bible’ produced by the American Psychiatric Association, with financial support from the pharmaceutical lobby. A lot of U.K. practitioners will be encouraged to use this schedule unless there is resistance from the professional bodies such as the BPS in this country to point out the danger of over- medicalising normal patterns of behaviour in children by using ‘crazy’ definitions such as “sub-clinical, normal variation – autism (maleness!) or bi-polar disorder (mood swings) or depression (sadness) or social anxiety (shyness).”The time is right to expand the debate amongst educational and child practitioners of all disciplines before it is too late and we end up with the disgraceful American  pattern of drugging 12% of their whole school population for attention difficulties with methylphenidate alone and then high percentages for other conditions. Indeed the drug companies are aiming to medicate 20% of all children who they claim have one behavioural or mental health diagnosis or another. I will leave you to contemplate your own response to this crucial societal issue.Dave Traxson, Chartered Educational Psychologist,BSc.,M.A.

For more information on this issue. 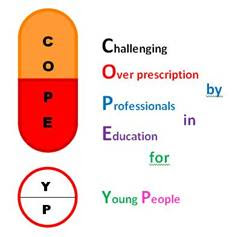