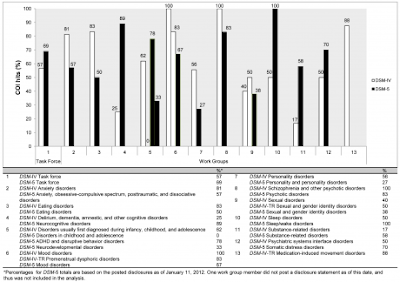 
DSM-5 conflicts of interest hit mainstream media; protestors rally, but is it for the right reasons? 03/14/2012


I did write for my high school newspaper (I can recall a particularly riveting article about different styles of shoes!), but these days I’m strictly a blogger, cavalierly inserting humor, my own biased opinion, and all manner of distractions and sidetracks into my “articles.”

Nevertheless, this ABC news article from yesterday (“DSM-5 Under Fire for Financial Conflicts of Interest”) follows the exact argument I put forward in my little piece entitled “For the DSM-5 Task Force, Being Greasy Never Been So Easy!”  Whoa, did I inadvertently produce some journalism here?

I have to admit, I liked my title better.

Ok, ALT; stop patting yourself on the back!

The ABC story was fueled by the publication of an academic analysis of the conflicts of interest of the various DSM-5 committees, conducted by the same researcher (Lisa Cosgrove) who published a similar analysis in the days of DSM-IV development.

As I wrote awhile ago, it’s practically a conflict-of-interest OLYMPICS!  Cosgrove found that about ¾ of the work groups have a majority of members with major ties to the pharmaceutical industry.  Some standout groups include:

Moreover, when comparing the figures from the DSM-5 to her previous analysis of the DSM-IV workgroups, Cosgrove has found that in about half the work groups, conflicts of interests have only gotten worse.

It appears that the APA thought transparency alone would be a solution to their metastisizing “conflict of interest” problem.

Well, they’re wrong.  We can clearly see the giant, throbbing tumor now, but the fact is it’s still there.

The whole point of disclosing conflicts of interest is determining whether someone is unencumbered enough to participate in a decision-making/fact-finding process.  For this to be in any way legitimate, there must be some threshold where the person’s conflicts of interest are too great, where they are removed from the process. But the APA apparently has no limit.

Oh, sure, they say something about “no more than $10,000/year directly from the pharmaceutical industry and no more than $50,000 in pharma stock options” … but with major gaps in their disclosure policy and no dollar amounts made public, how can we be sure this is any less of an empty gesture than the rest of their carefully choreographed “transparency” dance?

A wave of protest against the DSM has been building over the past few months, but I’m not sure that I’ll be able to unite with the mainstream (or “middle way”) DSM protesters.  Here’s why:

Middle way protestors are against the DSM-5 in particular, criticizing the development process, the addition of so-called “unscientific diagnoses,” financial conflicts of interest of the developers, etc.

The idea being that we simply need a better process for creating this thing.  And that the botched development of the DSM-5, which will result in flaws that could’ve been avoided with more rigorous procedures, is a risky business because it might turn the tide of public opinion against the very institution of the DSM; which would be terrible because we need some kind of DSM in order to treat mental illness at all.  The DSM detractors quoted in this article all seem to fall into that camp; Allen Frances, David Elkins, and Cosgrove herself.

But there’s another camp, which I and many others belong to.  Instead of being against the DSM-5 in particular, we’re against the institution of the DSM, period. Instead of arguing that the DSM-5 is marginalizing, stigmatizing, unscientific, we argue that the practice of diagnosing people itself is all of these things and worst of all… dehumanizing!

In ABC’s coverage, only the “middle way” DSM detractors are represented.  And I find myself feeling a little piqued by what they have to say.  For example:

Dr. Allen Frances, who chaired the revisions committee for DSM-4, said the new additions would “radically and recklessly” expand the boundaries of psychiatry.

“They’re at the boundary of normality,” said Frances, who is professor emeritus of psychiatry at Duke University. “And these days, most diagnostic decisions are not made by psychiatrists trained to distinguish between the two [normality and mental illness, presumably]…”

The boundary of normality?  He speaks as if he knows exactly where that is!  And that the DSM-IV catalogs “diseases” that fall well beyond it.

I beg to differ.

Take so-called “schizophrenia,” or psychosis, for example.  As John Perry so nicely puts it:

In my opinion, the real pathology in psychosis does not reside in the “mental content,” the images and the symbolic sequences.  All of that appears to be a natural psychic process, present and working in all of us.  This is normal madness, so to speak.  The schizophrenic “disorder” lies rather in the ego, which suffers from a constricted consciousness… The problem of the prepsychotic state is how to discover the impassioned life, and nature has its own answer in the form of a turbulent ordeal, a trial by immersion in the source of the passions – that is, a psychosis.

- John Perry, in The Far Side of Madness

[If you liked that quote and have some time on your hands, read this!]

From Perry’s point of view, psychosis is often a naturally transformative and healing process, somewhat like childbirth.  If there is such a thing as a “boundary of normality” (which I doubt), it falls well within it.  Psychosis is the ”normal” response of a psyche needing to heal.

Here’s another rather disturbing quote from the middle camp:

“My best hope would be for the APA to respond in a substantive way to the concerns we’ve raised.  They have an opportunity here to make a correction that would give the appearance, if not the reality of developing a diagnostic instrument that’s objective and has integrity.”

A semblance of objectivity and integrity – not necessarily the real thing – is her best hope for the DSM committee??

Should all the DSM-V detractors put aside their differences and join together to protest the DSM-V, or are the two camps far enough apart that their protests really can’t align?

As you ponder, consider this: a large DSM-5 protest (Occupy the APA) is planned for May 5th in Philadelphia at the site of the APA convention.  The middle way camp will necessarily be inside the convention (most of them belong to the APA, after all), while the rest of us will be standing outside, barred from entry.

It appears that more than mere distance separates our two camps.
Posted by dave traxson at 06:25