DSM5 - Research bombshell!! - Unethical corruption in DSM-5 working groups and editors -abc tv news -" DSM-5 task groups under fire for conflicts of interest "- 70% of the members who drew up the new scientifically dubious criteria have had direct payments of up to $10,000 from 'Big Pharma' according to Dr Lisa Cosgrove's research - it's not surprising then they recommend new subjectively defined (using "vague symptom clusters") conditions which will undoubtedly mean more medications are prescribed for our children in the U.K. 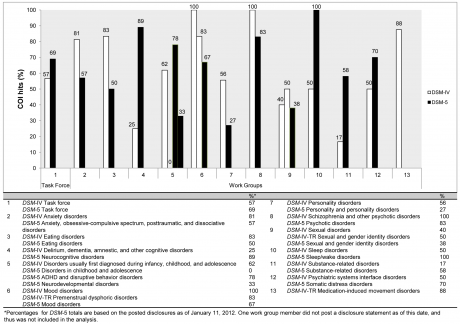 DSM5 IS VITAL TO THE U.S. INSURANCE BASED MEDICAL MODEL AS IT PROVIDES THE NUMERICAL CODE FOR THE CONDITION THE CHILD IS 'SUFFERING' FROM WHICH IS ESSENTIAL FOR AN INSURANCE CLAIM TO BE MADE.IT ALSO ALLOWS LAWYERS TO ARGUE ABOUT THE VALIDITY OF THE CLAIM - NEITHER OF THESE APPLIES ION THE U.K. SO WHY DO WE NEED TOM ADOPT THIS SYSTEM.

Controversy continues to swell around the fifth edition of the Diagnostic and Statistical Manual of Mental Disorders, better known as DSM-5. A new study suggests the 900-page bible of mental health, scheduled for publication in May 2013, is ripe with financial conflicts of interest.

The manual, published by the American Psychiatric Association, details the diagnostic criteria for each and every psychiatric disorder, many of which have pharmacological treatments. After the 1994 release of DSM-4, the APA instituted a policy requiring expert advisors to disclose drug industry ties. But the move toward transparency did little to cut down on conflicts, with nearly 70 percent of DSM-5 task force members reporting financial relationships with pharmaceutical companies -- up from 57 percent for DSM-4.

"Organizations like the APA have embraced transparency too quickly as the solution," said Lisa Cosgrove, associate professor of clinical psychology at the University of Massachusetts-Boston and lead author of the study published today in the journal PLoS Medicine. "Our data show that transparency has not changed the dynamic."

The DSM is developed by an APA-appointed task force and panels consisting of experts in various fields of psychiatry. But many of these experts serve as paid spokespeople or scientific advisors for drug companies, or conduct industry-funded research. Some of most conflicted panels are those for which drugs represent the first line of treatment, with two-thirds of the mood disorders panel, 83 percent of the psychotic disorders panel and 100 percent of the sleep disorders panel disclosing "ties to the pharmaceutical companies that manufacture the medications used to treat these disorders or to companies that service the pharmaceutical industry," according to the study.
Is Anybody 'Normal'? Watch Video
Mental Health First Aid Watch Video
Helping Your Teen Watch Video

"We're not trying to say there's some Machiavellian plot to bias the psychiatric taxonomy," said Cosgrove, who is also a research fellow at Harvard's Edmond J. Safra Center for Ethics. "But transparency alone cannot mitigate unintentional bias and the appearance of bias, which impact scientific integrity and public trust."

The DSM-5 has also drawn criticism for introducing new diagnoses that some experts argue lack scientific evidence. Dr. Allen Frances, who chaired the revisions committee for DSM-4, said the new additions would "radically and recklessly" expand the boundaries of psychiatry.

"They're at the boundary of normality," said Frances, who is professor emeritus of psychiatry at Duke University. "And these days, most diagnostic decisions are not made by psychiatrists trained to distinguish between the two. Most are made by primary care doctors who see a patient for about seven minutes and write a prescription."

Under the new criteria, grief after the loss of a loved one, mild memory loss in the elderly and frequent temper tantrums in kids would constitute psychiatric disorders. An online petition challenging the proposed changes, which would label millions more Americans as mentally ill, has accrued more than 12,000 signatures.

"We're not opposed to the proper use of psychiatric drugs when there's a real diagnosis and when a child or an adult needs pharmacological intervention," said David Elkins, president of the American Psychological Association's society for humanistic psychology and chairman of the committee behind the petition. "But we are concerned about the normal kids and elderly people who are going to be diagnosed with these disorders and treated with psychiatric drugs. We think that's very, very dangerous."

"In the beginning, our committee didn't want to go there because it brings into question the intentions and, to some degree the character of the people involved. But I think it's important to at least make these facts known without assassinating character in the process," he said.
Posted by dave traxson at 06:10