THE BIG ISSUE ON THE BIGGEST HEALTH ISSUE TO AFFECT OUR CHILDREN TODAY AND TOMORROW - THE RISING USE OF PSYCHOTROPIC DRUGS IN THE U.K. TO CONTROL CHILDREN'S NORMAL RANGE OF BEHAVIOURS - COURTESY OF THE BIG ISSUE MAGAZINE 28-02-12 -" THE POOL OF NORMALITY IS SHRINKING TO A SMALL PUDDLE DUE TO DSM5." 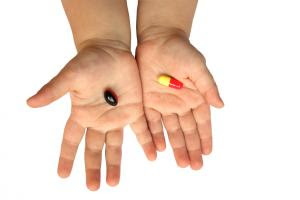 The number of kids prescribed ADHD drugs in the U.K. is rising.
A sign of the chaotic times we live in -
or
a substitute for better child-rearing?


The bath-time temper tantrums. The huffing and puffing over every little chore. The bargaining over time spent on homework and television. A lot of parents can measure their week by all these tiny battles with their child’s unruly energies. For some mums and dads, however, the strain of marshalling a wild streak can become almost unbearable.

After years of enduring such trying behaviour, a doctor’s diagnosis of Attention Deficit Hyperactivity Disorder (ADHD) can come as a blessed relief, since it also offers the possibility of a medical solution and the hope of a more manageable future.

Yet for some, our society is too keen to pathologise perfectly normal behaviour, desperate to explain away complex problems without any real effort. A debate around the use of Ritalin to treat ADHD has flared once again, after leading psychologist Dr L Alan Sroufe declared far too many kids are on the drug.

In a New York Times op-ed, the emeritus professor at the University of Minnesota wrote that three million children would not be taking the medication if their parents hadn’t “derailed” them psychologically. His suggestion that ADHD is used as a lazy substitute for better child-rearing has, understandably, caused considerable upset among parents on both sides of the Atlantic.

But could Dr Sroufe be on to something? He is not the first to suggest there is something sinister about putting children on a powerful stimulant. As the number of prescriptions for Ritalin in the UK rises, a growing number of specialists are worried we are moving toward the American tendency to label all ‘problem’ children and medicate at every opportunity.

Between 2005 and 2011, the number of prescriptions made for ADHD kids in the UK rose from 380,000 to 660,000 (a sevenfold increase from 1997). This could be a tipping point. As Dr Gwynedd Lloyd, an honorary fellow and education specialist at Edinburgh University, says: “We need to ask ourselves whether we want to go down the same road as the Americans.”

Some British doctors and psychologists fear great swathes of people could soon be labelled with some form of mental disorder if yet another edition of the psychiatrists’ diagnostic ‘bible’ is given the go-ahead.

If DSM-5 – the influential Diagnostic and Statistical Manual of Mental Disorders – is published next year by the American Psychiatric Association then shyness in children could conceivably be classified as a ‘disorder’. Other illnesses would include unhappiness following bereavement, and loneliness, which in some cases could lead to a diagnosis of chronic depressive disorder.

Aren’t these things that most people will go through at some point in their life? “The proposals in DSM-5 are likely to shrink the pool of normality to a puddle, with more and more people being given a diagnosis of mental illness,” says Til Wykes, professor of clinical psychology and rehabilitation at King’s College London.

Sue Morris, an educational psychologist at the University of Birmingham, believes many teachers are concerned about having so many medicated pupils in the classroom, and don’t feel they have much say in the prescription process. Commonly, a GP will refer a child to a paediatrician or child psychiatrist before giving parents a green light for Ritalin. But ADHD symptoms – hyperactivity, impulsivity and inattention – are supposed to show up in at least “two contexts” (in school as well as at home).

“Some areas [of the country] are doing well in bringing in teachers, making sure they’re part of ongoing assessments,” says Morris. “But where there’s not good practice, there’s concern a diagnosis is given only by running through a symptom checklist. There is a worry in the field that we’re pathologizing normal childhood.

“We’re living in a world that’s ever more challenging for children to develop in, and it’s too easy to say ‘lots of children must have disorders’, rather than ‘we’re not doing a good job bringing children up to cope with a chaotic world’. If something like shyness becomes considered a disorder, it’s a worry we’ll lose sight of perfectly normal reactions to life circumstances.”

Although most doctors and mental health experts are reluctant to align themselves with the anti-psychiatry movement, some fear this “narrowing of what’s normal” has its roots in the power of the pharmaceutical industry. Mental health disorders, they say, are too easily shaped by the clinical tests of profit-hungry ‘Big Pharma’.

At the most extreme end of the scepticism about psychiatric drugs (not just the preserve of Scientologists), some people question the existence of conditions such as schizophrenia, anxiety disorders and ADHD, believing they are all part of a plan to keep us too doped up to address our problems properly.

Dr Tim Kendall, a consultant psychiatrist from Sheffield who drew up the National Institute for Health and Clinical Excellence (NICE) guidelines on ADHD and its treatments, has urged a cautious approach to medication for children. He too is cynical about DSM-5. “Quite a lot of the people involved have strong links to the drug industry and that, I think, is a problem,” he says.

However, he also questions whether the conspiracy-fearing cynics understand the nature of defining a disorder. What does he say to those who query whether ADHD is real? “I’m always surprised when people say that. ADHD does exist, in so far as it describes a set of behaviours causing impairment and dysfunction. Outside of dementia there are no blood tests or x-rays for psychiatric problems. But what we’ve laid out in the [NICE] guidelines is that it’s not enough to show signs and behaviours: you’ve got to be able to demonstrate there is at least moderate impairment across a range of contexts – so if there are problems in school, but everything’s fine at home and in friendship groups, it’s not ADHD.

“With any mental health problem, if the symptoms are leading to impairment, dysfunction and unhappiness, then my guess is those people would benefit from evidence-based help,” Dr Kendall adds. “Ritalin has downsides: it can reduce growth, there can be weight loss because of appetite loss. But it does have a powerful effect, does appear to help kids with ADHD concentrate better, focus their attention, and has a strangely calming influence.”

"Everyone though agrees that if there are alternatives, we should be exploring them and looking at what psychological treatments can work and what helps the parents and the teachers." states Dr Tim Kendall, again, who represents the Royal College of Psychiatrists on this issue.

ADHD appears to come from problems with dopamine transporters in the brain. Ritalin, a methylphenidate, increases dopamine levels, enabling ADHD kids to focus, filter out distractions, make decisions and communicate more calmly. Parents benefiting from treatment insist ADHD is not just another term for bad behaviour. The right dosage of Ritalin has made a real difference to some very particular and intense problems, and – they hasten to add – is used alongside other strategies to nurture their child’s development.

Jenny Smith, from Guernsey, explains how her twin boys were diagnosed with ADHD at the age of 12 after extensive testing. “I tried everything – I’d read many books offering parenting advice, establishing routines and so on. I tried bed-time routines, which were difficult to establish due to the lads bouncing around, climbing out of bed and needing very little sleep. It was a relief to know there was a reason… I was able to access a more appropriate school, an environment that was sympathetic to their needs.”

Jenny’s sons are now studying for their A-levels following some “fine grades” in their GCSEs. “We know the pill is not a panacea, but the medication helps normalise chemicals in my children’s brains,” she says. “It allows them to have the opportunity to learn appropriate behaviour, to take advantage of the school curriculum, to calm their behaviour so that they can form positive relationships. For myself and my sons it has allowed us to have a better quality of life.”

In Glasgow, Anne Swartz, 58, looks after her 14-year-old grandson. He was diagnosed with ADHD at the age of nine. His erratic behaviour improved “hugely” after going on to a low dose of Concerta (a slow-release form of Ritalin). “He still has what I call little sparks – you take a back seat until he’s calmed down and then have a talk with him. He’s a complicated wee character but a loveable lad. He’s very remorseful. He’ll say things like, ‘I wish my brain won’t do this’. But prior to the medication it could be horrendous – smashed windows, the whole lot. His brain was racing in all different directions and he just wasn’t taking in any information.”

“Medication is not solely the answer,” Anne adds. “Parents need support with behavioural techniques too, not because they’re bad parents but because the child’s brain is working a bit differently and they need to know how to deal with it. I don’t know how any professor can say, ‘It’s bad parenting’. He doesn’t know how much we put into caring for them.”
Posted by dave traxson at 06:29