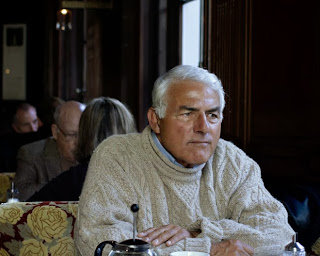 Tuesday, April 10, 2012
Are Psychiatrists Who Criticize New Proposals for the Diagnostic Manual Dangerous?

Psychiatrist Allen Francis (above) was chairman of the task force that developed the last edition of diagnostic Bible in Psychiatry, the DSM.  It was the fourth edition and came out in 1994.  As someone intimately involved in the process of formulating changes in the diagnostic nomenclature, he became concerned when he began to notice that the changes he helped create in the DSM were beginning to lead to the "upcoding" or expanding of psychiatric diagnoses to include normal but problematic variants of human behavior.


With widespread changes in insurance plans that paid far more to psychiatrists for medicating many so-called "biological" disorders than for providing psychotherapy for what used to be called "neuroses" or "acting out," along with major pushes by pharmaceutical companies to expand the indications of their lucrative new drugs to larger and larger numbers of people, more and more people were being medicated with potentially toxic drugs for what are, for all intents and purposes, disorders of behavior and relationships.  This has been a major theme of this blog.


[For clarification, I should note that diagnoses in psychiatry are not based on the causes of disorders (etiology), but on descriptions of the typical behavior, emotional and cognitive attributes that are seen in various syndromes. A syndrome is a group of symptoms that collectively indicate or characterize a disease, psychological disorder, or other abnormal condition. These characteristics tend to cluster together and can be distinguished from one another using epidemiology (the study of the risk factors, distribution, and control of disease in populations) and the presence of similar descriptions throughout history, as well as through the combined presence of a group of particular symptoms with the absence of other co-occurring symptoms and attributes.


The classification of psychiatric disorders is not based on causes because, in many if not most cases, we have not been able to track down an exact cause (due to our limited understanding of the brain and its relationship to behavior and mentation), and also because almost all psychiatric disorders have multiple biological, psychological, and socio-cultural risk factors.  In fact, "risk factors" rather than "causes" is probably the preferred term that should be used in psychiatry, because there are no necessary or sufficient antecedents to the development of the various disorders.


Nonetheless, all psychiatric diagnoses are not created equally.  Some - like schizophrenia - have been well described, and consistently so, for hundreds of years in multiple cultures.  The defining characteristics of many other conditions, like ADHD for example, are sort of voted on by committees of "experts," many of who have conflicts of interest because they get money from the pharmaceutical companies.  In those cases, the decisions about diagnoses are sort of like the ones made by the Council of Nicaea, during which various Christian Bishops literally voted on which of the many Gospels were the word of God, and which were not].


Dr. Francis has become a leading critic of the plan to come out with a newer edition of the diagnostic manual, to be called the DSM-5 (I guess roman numerals have become passe).  He worries that upcoding will get even worse with many of the new proposals, and medications even more widely mis-prescribed.  And not just by psychiatrists.  80% of anti-depressants, for example, are prescribed by primary care  physicians, and most stimulants by pediatricians.


And just wait and see what happens if psychologists ever get prescribing privileges, which they desperately seek!  Psychotherapy as we know it may disappear completely.


I also think that, since for most psychiatric conditions we do not know a whole lot more about the causes of the various psychiatric conditions than we did when the DSM-IV was published, coming out with a new diagnostic manual is premature to say the least. Also, since the current research base uses current definitions, changing all of the definitions can be very destructive to building on our scientific knowledge in the future.


Some of the suggested changes seem to center around the idea of "spectrum" disorders, in which various disorders are grouped together because some of the symptoms sort of look alike.


Just recently, the American Psychiatric Association (APA) recruited a new public relations spokesman, formerly of the US Defense Department, who was quoted as saying that "Francis is a 'dangerous' man trying to undermine an earnest academic endeavor."  It sounds like, rather than address the well-thought-out criticisms of Dr. Francis, the APA has elected to circle the wagons defensively and engage in ad hominem attacks.


In response, Dr. Francis posted a rebuttal in a psychiatric newspaper.  Allow me to quote his very cogent response:


"The piece in Time Magazine manages to raise again the silly APA suggestion that my objections to DSM-5 are motivated by a feared loss of royalties. Let’s set the record straight—hopefully for the last time. The royalties on my DSM IV handbook are about $10,000 a year—not at all commensurate with all the time I have spent trying to protect DSM-5 from making all its repeated mistakes.


"My motivation for taking on this unpleasant task is simple—to prevent DSM-5 from promoting a general diagnostic inflation that will result in the mislabeling of millions of people as mentally disordered. Tagging  someone with an inaccurate mental disorder diagnosis often results in unnecessary treatment with medications that can have very harmful side effects. I entered the DSM-5 controversy only because I had learned painful lessons working on the previous three DSM’s, seeing how they can be misused with serious unintended consequences. It felt irresponsible to stay on the sidelines and not point out the obvious and substantial risks posed by the DSM-5 proposals.


"I don’t consider myself a dangerous man except insofar as I am raising questions that seem dangerous to DSM-5 because there are no convincing answers. My often repeated challenge to APA—provide us with some straightforward answers to these twelve simple questions:


1.   Why insist on allowing the diagnosis of Major Depressive Disorder after only two weeks of symptoms that are completely compatible with normal grief?


2.   Why open the floodgates to even more over-diagnosis and over-medication of Attention Deficit Disorder when its rates have already tripled in just 15 years?


3.   Why include a psychosis risk diagnosis which has been rejected as premature by most leading researchers in the field because it risks exacerbating what is already the shameful off-label overuse of antipsychotic drugs in children?


4.   Why introduce Disruptive Mood Dysregulation Disorder when it has been studied by only one research team for only six years and risks encouraging the inappropriate antipsychotic drug prescription for kids with temper tantrums?


5.   Why sneak in Hebephilia under the banner of Pedophilia when this will create a nightmare in forensic psychiatry?


6.   Why lower the threshold for Generalized Anxiety Disorder and introduce Mixed Anxiety Depression when both of these changes will confound mental disorder with the anxieties and sadnesses of everyday life?


7.   Why have a diagnosis for Minor Neurocognitive Disorder that will unnecessarily frighten many people who have no more than the memory problems of old age?


8.   Why label as a mental disorder the experience of indulging in one binge eating episode a week for three months?


9.   Why introduce a system of personality diagnosis so complicated it will never be used and will give dimensional diagnosis an undeserved bad name?


10. Why not delay publication of DSM-5 to allow enough time to complete the previously planned and crucial second stage of field testing that was abruptly cancelled because of the constant administrative delays in completing the first stage?


11. Why should we accept ambiguously worded DSM-5 diagnoses whose reliability barely exceeds chance?


12. And most fundamental: Why not allow for an independent scientific review of all the controversial DSM-5 changes identified above—proposed by 47 mental health organizations as the only way to guarantee a credible DSM-5? What is there to hide and what harm is done by additional careful review?


"If I am a dangerous man, it is because I am exposing DSM-5’s carelessness and thus putting at risk APA’s substantial publishing profits. During the past 3 years, I have made numerous attempts, private and public, to warn the APA leadership of the troubles that lie ahead and to implore them to regain control of what was clearly a runaway DSM-5 process.


"This has had no real effect other than delaying publication of DSM-5 for a year and the appointment of an oversight committee that turned out to be toothless. I am reduced now to just one means of protecting patients, families, and the larger society from the recklessness of the DSM-5 proposals—repeatedly pointing out their risks in as many forums as possible."


Well said, my good man.  It seem to me that the APA is at risk of being dangerous, not Dr. Francis.