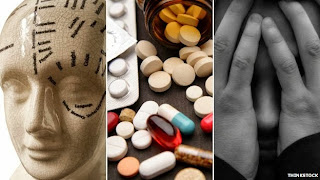 Antipsychotic drugs made me want to kill myself'

While antipsychotic drugs are seen as the most effective treatment of psychotic episodes, they are also recognised to have devastating side effects.


Doctors say many patients don't like taking medication long term, but a study published in the Lancet suggests that taking antipsychotic medication more than halves the risk of relapse in schizophrenic patients.


"I used to see nasty, dirty rat-like things running around when I went outside, I could see people in the streets screaming abuse at me and making obscene and threatening gestures.


"I was hearing a voice that was saying all kinds of nasty things about me. I was terrified, I tried to kill myself."


David Strange was diagnosed with paranoid schizophrenia when he was 25. He was sectioned and given antipsychotic drugs, which he says made him feel "a bit better for a while," but gave him a succession of unpleasant side effects.


When I first became ill, I was warned there are certain drugs that weaken the lower lip, even now I still dribble”


But without medication, the voice he hears is a constant stream of abuse that "comments on what other people are thinking and the horrible things they want to do to me".


Professor of psychiatry Stefan Leucht, from the Technische Universitat in Munich, led the latest research. He also found that fewer patients on antipsychotic drugs were readmitted to hospital - one of the highest costs associated with mental illnesses.


David says taking antipsychotic drugs for 14 years has helped him deal with his hallucinations and the voices he hears. They are still present but they no longer dominate his life.


One of the many drugs he was given was thioridazine, which gave him an irregular heartbeat, something which can be potentially fatal. David remembers lying down with his heart beating really fast, thinking he did not have long left to live.


"Some drugs made me so anxious I tried to kill myself and ended up getting locked up in hospital."


Even what he refers to as the "good ones" give him muscle and joint pain, jerkiness similar to the symptoms of Parkinson's Disease and severe sexual dysfunction.


But he says he would still rather take the drugs than try and function without them.


"Being unmedicated is an unliveable hell. I'm happy to put up with all of this just to be more functional and less scared."


The longer antipsychotic drugs are taken, the more chronic the side effects become. The nature of mental illness means patients are often prescribed medication for the rest of their lives.


Daniel Levy, aged 54, has bipolar disorder and has been taking antipsychotic drugs for nearly 30 years. During that time he has been sectioned and has also attempted suicide.


David has been taking antipsychotics for many years


"The drug chlorpromazine made me tremble, it also made me dribble. When I first became ill I was warned there are certain drugs that weaken the lower lip, even now I still dribble.


"I don't know I'm doing it until I notice it on my clothes. It looks absolutely terrible."


But the drug did help him to stay out of hospital and was effective in controlling his symptoms.


"The side effects are the price I pay for keeping out of hospital," says Daniel.


"It's a balancing act - doctors never know in advance how you will react to a particular drug."


Newer "atypical" antipsychotic drugs show fewer of the physical tremor-inducing side effects and are commonly prescribed to patients starting treatment for the first time, says Dr Oliver Howes from the Institute of Psychiatry.


These still often lead to severe weight gain, increasing the risk of diabetes, blood clots and cardiovascular diseases. The risk is especially high for patients who stay on medication for many decades.


"We have no way of knowing in advance if a given drug is going to suit a patient - so sometimes patients have to try several before they find one that both helps them and is tolerable," says Dr Howes.


Unfortunately the drugs with the most side effects are also the ones which have been shown to be the most effective and are supported by many years of research, says Prof Leucht.


He says that if a patient experiences unpleasant side effects, their clinician should always try another drug, but acknowledges that this is not always possible in practice as some doctors are afraid to change their patient's medication if it appears to be working well.


Dr Howes says the side effects of antipsychotics need to be put into perspective.


"Mental health illnesses are devastating. There is a substantial loss of life associated with illnesses such as schizophrenia, predominantly from suicide. We want to prevent that."