Psychiatric Drugs work by targeting their toxicity at certain neurological pathways or cells in the brain. SHOULD WE BE USING THESE WITH CHILDREN UNDER FIVE? 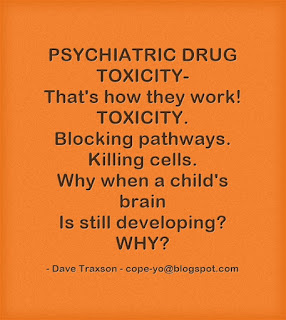 DISCUSS WITH YOUR PROFESSIONAL TEAMS PLEASE:
Should we be drugging children under five more and more to control their behaviour with amphetamine like pharmaceutical compounds such as Ritalin? Regular side effects include sleep disturbance and weight loss which are real concerns for children and rarer side effects can include an increased risk of heart problems and even sudden death from heart failure similar to other psycho-stimulants.
Toxic is the scientific word for poisonous. All drugs work by poisoning cells. If it is a cancer or bacterial infection cell that is obviously good news for health BUT if it is a child's brain cells or their neurological pathways therein that is potentially bad news methinks.
The British Psychological Society and the Association of Educational Psychologists which are my professional bodies both have ethical concerns about the increasing use of psychiatric drugs with younger and younger children and the impact that might have on their still developing brain. Some countries like France put bans on using these drugs under a certain age. For France it is the age of seven. In Britain there are new NICE Guidelines for ADHD (2018) that include a new improved pathway for the under fives but no outright ban is in place to safeguard this vulnerable group.
WHAT DO YOU THINK?!
"The best window on a society's soul is the way it chooses to treat its children." Mandiba.
Posted by dave traxson at 16:14