ANTIDEPRESSANTS : Website cited as credible source of cases of risk of taking these drugs which can have profound effects on peoples levels of aggression. 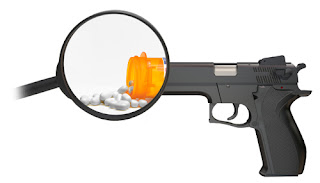 Before You Take That Antidepressant, Visit This Web Site

With our national love of drugs, sex, celebrities and violence you'd think SSRIstories.com would be more popular.

You can search and sort stories by drug--Lexapro, Celexa, Luvox, Prozac, Zoloft and Paxil and the related Effexor and Cymbalta--date, location, type of violence and the articles about school shootings, famous cases and legal cases won on SSRI defenses are color coded.


You don't even have to read the whole article.
SSRIstories founder and manager Betty Henderson pulls out and boldfaces the story's drug-related citation like Lynyrd Skynyrd harmonicist Mike Caruso's remark that, "the doctor put me on Cymbalta. That turned me manic," and Oklahoma murder suspect Ronson Bush's remark, "I killed my friend when I took these. I'm not going to take them," when offered SSRIs at the Grady County Jail.

The site even has medical journal credibility, cited in an article in the spring 2009 Journal of American Physicians and Surgeons in which author Joel M. Kauffman, Ph.D wrote, "Since no clinical trial involving multiple homicides is ever likely to be run, no firmer evidence [of SSRI dangers than SSRIstories] is likely to be found."

Pharma and the FDA may still be agnostic about SSRIs causing violence but 700 murders, 200 murder-suicides and 47 postpartum depression cases, including the 2006 case of Andrea Yates who drowned her five children on Effexor, don't lie.
Nor do 51 school shootings incidents including Columbine, where shooter Eric Harris was on Zoloft and Luvox, Red Lake where shooter Jeffrey Weise was on Prozac, and Virginia Tech and Northern Illinois University where the shooters were reportedly affected by antidepressants. Nor do hundreds of suicides--including children--lie and veteran-related violence like the May 11 death of five at a combat stress center near Baghdad allegedly committed by Army Sgt. John Russell who was on antidepressants-- eerily presaging the shootings at Fort Hood's Soldier Readiness Center.

Just as startling as the ferocity of the SSRI-related violence is its bizarre, often unprovoked nature: A Midwest City, OK woman who accepted a cup of tea from an elderly nurse she had just met--and then strangled her. A 12-year-old boy left in his cousin's car while she shopped at Target--who killed her 5-week-old daughter for no earthly reason.

SSRIs also produce kleptomania as seen with the Ryder/Zoloft case observes Henderson, pyromania as seen in an English millionaire who burned down his own house and immolation suicides and a "strange kind" of nymphomania. "SSRIstories has 10 cases of women school teachers who molested their minor male students. The O'Reilly Factor has said it's receiving one case a week of this same kind of new crime."

Just as dangerous as SSRIs themselves, is withdrawing from them says the site in a prominent warning. "It is important to withdraw extremely slowly from these drugs, usually over a period of a year or more, under the supervision of a qualified specialist."

Henderson began SSRIstories as a message board in 1997 after experiencing side effects to Prozac, prescribed to her to quit smoking, that were so severe she was hospitalized. Soon she was joined by two other anti-SSRI activists, one whose daughter had killed herself on the antidepressants, and they began posting SSRI stories from news sources. Henderson has spoken on the radio and at FDA hearings and the site has been cited by the New York Times, Chicago Tribune and Los Angeles Times.
But it plays David to the "Goliath" of pharma funded sites like WebMD, emedicine, Medicinet, Righthealth and
Everydayhealth with their ubiquitous "Are You Depressed?" ads. In fact Eli Lilly was a founding partner of WebMD according to the Washington Post.

No, SSRIstories just archives 22 years of important drug related stories that the 72-year-old Henderson researches and verifies as a public service.
Posted by dave traxson at 20:08