DSM5 CRITERIA 2013 - TEMPER TANTRUMS PATHOLOGISED AFTER THOUSANDS OF YEARS OF PARENTS COPING NATURALLY WITH THEM - IT MAKES ME, MANY CHILD PSYCHOLOGISTS, MANY PARENTS AND MASSES OF PROFESSIONALS HOPPING MAD 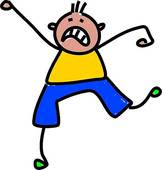 
- WHAT A MOUTHFUL! - sounds as if a committee have added a keyword at each stage!


All of a sudden, it seems, millions of American children are said to be afflicted with mental illnesses. And they're being put on strong medications- over periods of years- as treatment. Isn't it time we stopped and looked at what the mental health establishment is getting us to do to our children? –Gary Null PhD

PART OF REVIEW OF DSM5 BY JOHN M GROHOL D.PSYCH.(PSYCHCENTRAL)

I could probably just stop at the name and you would see how wrong this is. This is for a tiny slice of childhood (you have to be between ages 6 and 10 to receive this disorder; what happens if, at age 11, you still have the symptoms is a mystery). It is characterized by “temper outbursts are manifest verbally and/or behaviourally, such as in the form of verbal rages, or physical aggression towards people or property.” So, in other words, a temper tantrum. Something children have been doing for centuries is apparently now a serious enough problem to warrant its own disorder?

"A TEMPER TANTRUM IS AN AGES OLD METHOD OF COMMUNICATING FRUSTRATION BY A YOUNG CHILD.FROM A DEVELOPMENTAL PERSPECTIVE - IT IS  AN EXPERIMENTAL AND CREATIVE WAY OF BEHAVING, TRYING TO GAIN CONTROL OVER THEIR WORLD  THAT THE CHILD THEMSELVES MODIFIES OVER TIME WITH THE CARING SUPPORT OF WELL INTENTIONED ADULTS."

ITEM COURTESY OF THE PSYCHCENTRAL WEBSITE
Posted by dave traxson at 16:58