DSM-5 IS PUBLISHED 18-05-13 - WOE IS ME, AFTER ALL THE CRITICISM!? Is grief a mental illness? Psychiatrists, critics face off over revised diagnostic guidebook 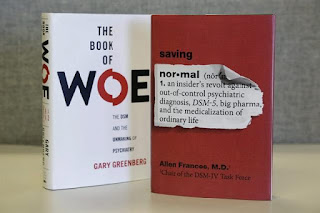 Is grief a mental illness?What about GOOD GRIEF (the normal healthy response to significant loss) Psychiatrists, critics face off over revised diagnostic guidebook

This Monday, May 13, 2013 photo shows the books "The Book of Woe" by Gary Greenberg and "Saving Normal" by Allen Francis on display in Chicago. Recent criticism of changes in an update of psychiatry's most widely used guidebook for diagnosing mental illness include these books by two respected therapists. They argue that the American Psychiatric Association's guidebook is turning normal human conditions into mental illness and will lead to even more overuse of psychiatric drugs. The association is introducing the updated guide at its annual meeting in San Francisco in May 2013. (AP Photo/M. Spencer Green)