'The Myth of the Chemical Cure' - An Interview with Joanna Moncrieff - Courtesy of the BeyondMeds : Alternatives to Psychiatry Website 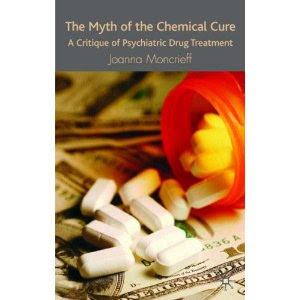 An Interview with Joanna Moncrieff: The Myth of the Chemical Cure
March 6, 2009 By Monica Cassani
This is a relatively old interview that I never posted because when it first popped up on my radar I had recently done another post featuring Joanna Moncrieff and her book. I also try to keep my news items relatively fresh. She’s actually been mentioned many times on this blog. Most recently in another book review of the same book. She’s one of the good doc’s out there who is telling the truth.
In any case, I’m in a bad slump and this is a damn good interview so it’s time to share it.
I’d also like to remind people I take submissions for exactly times like these when I’m having a hard time doing the work I so much like to do. If anyone wants to help keep this blog bouncing, please send me a suggestion of material you’re aware of or an original written piece. All submissions will be considered.
Anyway…here we are with Joanna Moncrieff:
Dr. Moncrieff is the author of The Myth of the Chemical Cure:A Critique of Psychiatric Drug Treatment
In this interview she responds to questions about this so – called “chemical imbalance” and the treatment of depression.
1) Dr. Moncrieff, first of all, what led you to write this about about “the myth of the chemical cure”?
What is written in textbooks about psychiatric drugs and how they work never seemed to match up to reality to me. So I started to look carefully at the research on drugs and gradually I came to realise that there was no evidence that they were acting specifically- that they were reversing the basis of a disease- as it was claimed. At the same time I was interested in how drugs came to be so highly regarded in psychiatry- how they came to be the dominant form of treatment. I realised that it was because they were believed to be specific that they were seen as so important, because the idea that they are specific underpins the idea that psychiatry is a medical activity, concerned with reversing medical diseases.
So I began to try and trace how the idea- the myth as I believed it – that they are specific treatments was constructed.
2) I would think that when people have to deal with the death of a mother/father, brother/sister, or even a pet, I think that it is natural and normal to feel depressed. When did we start giving anti-depressant medication for the normal transitions of life that we all have to endure?

The modern concept of depression, as a common condition in need of medical treatment, was invented and promoted in order to market the earliest antidepressants in the 1960s. However, it was when the market for benzodiazepines collapsed in the late 1990s that the pharmaceutical industry turned to depression to create a mass market.
It was during the 1990s that the idea that depression affects up to 1 in 4 of the population and other such figures were publicised and the motive was to create a market for the new and profitable antidepressants known as SSRIs.

3) How exactly do psychiatrists find out if there is a real chemical imbalance in the brain? Or are they just experimenting with patients?
Psychiatrists have no way of telling that someone has a chemical imbalance. The idea that depression is caused by a chemical imbalance is simply a hypothesis. There is no consistent evidence that there is any biochemical abnormality in people diagnosed as depressed. The idea has been promoted by drug companies and professional organisations, but the evidence base for it is almost non existent. Most experts say that the fact that people improve when you give them antidepressants is the strongest evidence that there is a chemical imbalance. But there are other ways of explaining this- antidepressants are psychoactive drugs, that may suppress emotional feelings, or just sedate people.
Anyway, as recent research shows, people improve barely more with antidepressant than they do with a placebo. (finish the interview here)