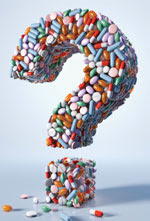 Now Antidepressant-Induced Chronic Depression Has a Name: Tardive Dysphoria - So the side-effects of the drugs are creating new 'mental illnesses,' - CRAZY!!!!!!!!

New research on why antidepressants may worsen long-term outcomes
Published on June 30, 2011 by Robert Whitaker in Mad in America

Three recently published papers, along with a report by a Minnesota group on health outcomes in that state, provide new reason to mull over this question: Do antidepressants worsen the long-term course of depression? As I wrote in Anatomy of an Epidemic, I believe there is convincing evidence that the drugs do just that. These latest papers add to that evidence base.

Although this concern first surfaced in the late 1960s and early 1970s, when a handful of psychiatrists expressed concern that antidepressants were causing a “chronification” of the disorder, it was in 1994 that Italian psychiatrist Giovanni Fava, editor of Psychotherapy and Psychosomatics, urged the field to directly confront this possibility. He wrote: “Within the field of psychopharmacology, practitioners have been cautious, if not fearful, of opening a debate on whether the treatment is more damaging [than helpful] . . . I wonder if the time has come for debating and initiating research into the likelihood that psychotropic drugs actually worsen, at least in some cases, the progression of the illness which they are supposed to treat.”

In subsequent papers, Fava set forth a biological explanation for why this may be so. Psychiatric drugs perturb neurotransmitter pathways in the brain, and in response to that perturbation, the brain undergoes a series of compensatory adaptations in an effort to maintain normal functioning of those systems. In scientific terms, the brain is trying restore its “homeostatic equilibrium.” Fava has dubbed this compensatory response to a psychiatric drug “oppositional tolerance.”

For instance, a selective serotonin reuptake inhibitor (SSRI) blocks the normal reuptake of serotonin from the synaptic cleft, which is the tiny gap between neurons. Serotonin now stays in the cleft longer than normal, and feedback mechanisms immediately kick into gear. The presynaptic neurons begin putting out less serotonin than usual, while the postsynaptic neurons—the neurons receiving the message—decrease the density of their receptors for serotonin. The drug is acting as an accelerator of serotonergic activity; the brain responds by putting down the brake.

When Fava first raised this issue in the 1990s, several American researchers wrote that this was a valid concern, which needed to be investigated. One who did so was Rif El-Mallakh at the University of Louisville School of Medicine. He has periodically revisited this issue, and in a paper published in the June issue of Medical Hypotheses, he provides an overview of “emerging evidence that, in some individuals, persistent use of antidepressants may be pro-depressant.”
El-Mallakh’s Overview

This condition, El-Mallakh writes, often develops in people who had a good initial response to an antidepressant, and then continue taking the drug. However, up to 80% of patients maintained on an antidepressant suffer a recurrence of symptoms,  and once that “initial treatment response is lost,” continued efforts to treat the relapsed patient with antidepressants frequently results in “poor response and the rise of treatment-resistant depression.” Ultimately, this process—the continual prescribing of antidepressants to someone who has become treatment resistant—may "make the chronic depression permanent.”

In his discussion, El-Mallakh notes that people without any history of depression who are prescribed an antidepressant for other reasons—anxiety, panic disorder, or because they are serving as “normal controls” in a study—may become depressed, with that depression at times persisting for a fairly long period of time after the antidepressant is withdrawn. The reason that antidepressants may have a “prodepressant effect,” El-Mallakh writes, is that “continued drug treatment may induce processes that are the opposite of what the medication originally produced.” This is the “oppositional tolerance” that Fava has written about, and this process may  “cause a worsening of the illness, continue for a period of time after discontinuation of the medication, and may not be reversible.”
This same basic mechanism—oppositional tolerance to a psychiatric drug—has been proposed to be a cause of tardive dyskinesia (TD), which develops with some frequency in long-term users of antipsychotic medications. TD is characterized by repetitive, purposeless movements, such as a constant licking of the lips, which is evidence that the basal ganglia has been damaged by the drugs. Although various explanations for TD have been put forth, one thought is that it is caused by drug-induced dopamine supersensitivity.
Antipsychotics block dopamine receptors (and in particular, a subtype known as the D2 receptor), and in compensatory response, the brain’s neurons increase the density of their D2 receptors, and thus become “supersensitive” to this neurotransmitter. That may lead to the constant firing of neurons controlling motor movement (such as tongue movement), and even when the offending antipsychotic is withdrawn, TD symptoms often remain, which suggests that the brain is unable to renormalize its dopaminergic pathways.
With antidepressants, the problem may be that patients, because of the “oppositional tolerance” process, end up with a depleted serotonergic system. The postsynaptic neurons end up with a reduced density of receptors for serotonin; in rat studies, long-term treatment with an SSRI led to markedly reduced levels of serotonin in "nine areas of the brain."  El-Mallakh, in his paper, details several other ways that exposure to an SSRI may deplete serotonergic function, and notes that in experiments with young animals, such impairments are "associated with increased depressive and anxious behaviors."

In conclusion, El-Mallakh writes that "a chronic and treatment-resistant depressive state is proposed to occur in individuals who are exposed to potent antagonists of serotonin reuptake pumps [i.e. SSRIs] for prolonged periods. Due to the delay in the onset of this chronic depressive state, it is labeled tardive dysphoria. Tardive dysphoria manifests as a chronic dysphoric state that is initially transiently relieved by -- but ultimately becomes unresponsive -- to antidepressant medication. Serotonergic antidepressants may be of particular importance in the development of tardive dysphoria."

Another Side of Oppositional Tolerance
El-Mallakh detailed how tardive dysphoria may develop in patients who initially respond to an antidepressant and then stay on antidepressants long term. But what if patients respond well to an antidepressant and then stop taking the drug?  Their brains have been modified by exposure to the antidepressant (i.e. oppositional tolerance has developed), and thus, upon withdrawal of the drug, are they more likely to relapse than if they hadn’t been exposed to an antidepressant in the first place?
This is the question investigated by Paul Andrews and his collaborators at Virginia Commonwealth University in a report that was published online this week in Frontiers in Evolutionary Psychology. In the study, Andrews compared relapse rate for patients who remitted while on placebo during the initial phase of a study and then remained off-drug during a follow-up period (placebo-placebo group) with the relapse rates for patients who remitted while on an antidepressant during the initial phase of a study and who were then withdrawn from the drug during the follow-up period (drug-placebo group.) He hypothesized that the drug-exposed patients, because of oppositional tolerance, would have a higher rate of relapse, and he found that to be true. In a meta-analysis of 46 studies, he determined that the relapse rate for the placebo-placebo group was 24.7%, compared to 44.6% for the drug-placebo patients.