"CRACKED: WHY PSYCHIATRY IS DOING MORE HARM THAN GOOD." BY JAMES DAVIES + Admisssion of "a temptation to medicalise" by Head of Royal College of Psychiatrists+ "Numbing is not curing a condition." 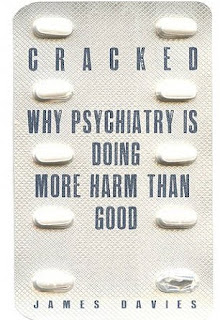 Psychiatrists - the shrinks, trick-cyclists, Viennese witch-doctors - have always been either figures of fun or feared.


If it wasn’t Freud getting you to talk dirty about your mother, or the men-in-white-coats in the Soviet Union locking people away for thinking the wrong thoughts, then it was Peter Sellers in a Richard III wig, more mad than any of his patients, in What’s New Pussycat? or Jack Nicholson being tortured in One Flew Over the Cuckoo’s Nest.

The traditional therapies on offer were barbaric - lobotomies, electro-convulsive seizures - and needless to say never did anyone any good. Nevertheless, psychiatry continues to be the great growth industry of our times - 450 million people worldwide ‘have a mental health problem’ - despite the fact that it has ‘the poorest curative success’.

The conclusion (and the argument of this essential book) is obvious: psychiatry is basically bogus - and damaging. There is no solid scientific justification for any of its activities - as the only ‘identifiable biological diseases’ involving an observable malfunction of the brain are epilepsy, Alzheimer’s, Huntington’s chorea, strokes and cerebral tumours.


The ‘chemical imbalance’ theories have been debunked, and as James Davies remarks, ‘no biological markers have been identified’ for the thousands of behavioural ‘disorders’ that now prevail.

Wonder drug: But placebos have been found to be just as effective

This hasn’t stopped the psychiatric experts from cooking up ailments, however. Their bible, the Diagnostic and Statistical Manual of Mental Disorders, gets thicker with each new edition. Despite there being ‘no scientific evidence’ for any of this, people are led to believe they have ‘a problem in their brain’ if they drink too much coffee (‘caffeine-related disorders’), stutter or swear (‘language disorders’), are shy or reserved (‘social phobias’), suffer period pains, are too fat or too thin, feel irritable, sexy, unsexy, sleepless, tired, or experience grief for more than two weeks after the death of a loved one. By these means, 26.2  per cent of all American adults suffer from a disorder of some sort, requiring that it be ‘pharmacologically treated’.

Though psychiatric research is by all accounts ‘a hodgepodge, scattered, inconsistent and ambiguous’, one thing has definitely emerged - that anti-depressants don’t work.


Extensive trials have shown that placebos induce as much of a degree of uplift as Prozac, Seroxet or any of the other wonder drugs, which simply make patients feel numb, glassy and emotionally disengaged.

As Davies says: ‘Numbing things isn’t curing things or even, in the long run, helping things.’ The drugs are essentially sedatives, and people are plunged into such a fog ‘they can no longer feel depressed or anything else’.

The biggest horror is the dosing of children with Ritalin, ‘which is as powerful as cocaine’. These days, any child who’s a bit naughty, inattentive, cheeky, quick or slow,  (i.e. any child who is childish) is diagnosed as suffering from Attention Deficit Hyperactivity Disorder (ADHD), or is autistic or has Asperger’s Syndrome. If paediatricians and psychiatrists are to be believed, autism has increased 20 times in 15 years, and as a consequence 5.29 per cent of the global child population is on tablets.

Few children actually warrant the diagnosis - as Davies says, there is now an ‘out-of-control medicalisation of normality’. So who are the ultimate villains of the piece? Answer: the pharmaceutical companies, which make over £12.5 billion each year from the sale of happy pills. Sane people are told they are insane because it is big business.


The drug companies pay eminent professors, university officials and teaching hospital chairmen millions ‘in personal income’ to concoct more and more abnormalities so that more and more pills can be dished out by GPs and specialists.

They pocket consultancy fees to attend conferences, give marketing lectures and endorse useless tablets. They are bribed, in essence, not to openly criticise the pharmaceutical industry. Davies (courageously) names names.

What this adds up to is a scandal that is bigger and more widespread than thalidomide. If people are ‘not getting any clinically meaningful benefit’ from the pills, then it is because depression, for instance, is simply to be sad or disappointed, unlucky in love, bored or bereaved, full of remorse, jealousy and low morale.

It is not a condition or a deviation - it is normal. Feeling rotten and anxious, being up and down, or even despairing, are all part of the ordinary problems of living - of being human and not a robot or a zombie.

When Davies confronted Professor Sue Bailey, head of the Royal College of Psychiatrists, she was frighteningly honest and virtually chucked in the towel: ‘When you go into a profession where you want to help people, and you don’t have the tools to help them, the temptation is to medicalise them.’

Psychiatry is based upon and feeds the delusion that we have a fundamental in-built right to be continuously happy. Grasp this, stop fretting that you are not full of beans, start enjoying being grumpy, laugh at life, admit that everyone is ill-adjusted to something or other, and, well, you may very well soon end up being me. Twenty stone of sardonic Welsh idiot.


There - hasn’t the mental image of that made you feel better already?