DSM-5 :How Many Billions a Year Will It Cost? - article by Professor Allan Frances - Courtesy of the Psychology Today website. 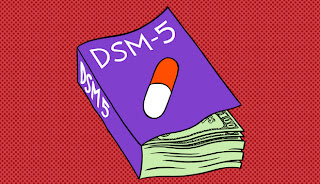 How Many Billions a Year Will the DSM-5 Cost?


In preparing the DSM-5, the revised manual that is to be the next bible of psychiatric diagnosis, the American Psychiatric Association has been extravagantly indifferent to all matters of cost.
There are profound economic consequences to where boundaries are set between what is normal and what is considered a mental disorder. Diagnosis of mental illness brings on a cascade of costs, including doctor visits, tests, medications (and treatment for their complications), forensic and prison costs, disability obligations, the siphoning of educational resources and absenteeism.
We are already experiencing an inflation in psychiatric diagnosis and an explosion in the use of expensive, and often unnecessary and harmful, psychotropic drugs.
Now, the fifth edition of the Diagnostic and Statistical Manual of Mental Disorders will add new categories of mental illness with very high prevalence rates in the general population. A new diagnosis here, a new diagnosis there, and pretty soon you have millions of new patients and billions of dollars in expenditure.
Seemingly small DSM-5 changes will make a big difference. Normal grief will become “major depressive disorder,” so that pills and medical rituals will be applied to a person’s natural emotional reaction to the loss of a loved one.
Excessive eating a dozen times in three months will become not mere gluttony but “binge eating disorder.” Forgetfulness in old age will be “minor neurocognitive disorder,” a label encompassing an enormous new patient population (only some of whom are at real risk of dementia) and incurring huge costs of unnecessary brain imaging when there is no effective treatment.

At the other end of the age continuum, temper tantrums will be diagnosed as “disruptive mood dysregulation disorder.” And these are but a few of the many changes in the DSM-5 that will create millions of new “patients,” many of whom would do better without expensive, potentially harmful treatments.
The new manual will also encourage doctors to misdiagnose physical disorders as mental ones by creating a broad new category for patients who are anxious about their medical symptoms.
No one has calculated the total direct and indirect monetary costs of the DSM-5 to the U.S. economy, but the drain threatens to be enormous. And the extra money will probably be spent in the wrong places.
Our scarce mental-health resources are already distributed in an irrational manner. We badly shortchange those with clear psychiatric disorders while overtreating essentially normal people. Many psychiatric patients wind up filling our overcrowded prisons at an annual cost per capita greater than a year at Princeton University.
By further reducing the “normal” pool, the DSM-5 will divert even more resources away from those most in need of help.
How will DSM-5 raise costs?
First there are the direct and indirect costs of treating the newly diagnosed patients. These will be further amplified by the extension of health insurance under the Affordable Care Act to some 34 million more Americans, and its requirement that insurance include comprehensive care for mental disorders.
This is a desirable policy change; a greater investment is certainly needed to shore up our badly shortchanged mental- health system. But the costs should be predictable and the money spent where it is likely to do the most good.
Then there are indirect medical costs of treating complications from excessive medication use. Antipsychotics frequently cause enormous weight gain that can lead to diabetes and heart disease. Overdoses with prescription drugs now cause more visits to emergency rooms and expensive hospitalizations than overdoses with street drugs.
Disability payments, workers compensation and veterans benefits spent on psychiatric care will also rise. And the newly diagnosed will, of course, incur increased sick days, resulting in a loss of productivity.

The new DSM-5 diagnoses can be as dangerous as new drugs, but have not received the same kind of thorough risk-benefit review the U.S. Food and Drug Administration provides before approving a new medicine. And they have received no cost-benefit review.
Having been extremely profligate in its own expenditures -- the DSM-5 has already cost $25 million, five times as much as the DSM-IV in 1994 -- the association has taken no account of the potential costs to the public from its clinically risky diagnostic changes.
It is now desperately dependent on DSM’s perennial best- seller status to balance its books and is prematurely racing the new manual to press -- treating it as a publishing cash cow, not the public trust it should be.
We need a broader national dialogue on mental health, its costs, and how best to spend precious resources. The DSM-5 is a giant step in the wrong direction -- away from good clinical common sense and fiscal responsibility.
Clinicians and patients have a big stake in pushing back, and so do government and industry. The only sector that stands to benefit from the DSM-5 is the pharmaceutical business. The rest of us will pay the price.
(Allen Frances, a psychiatrist and professor emeritus at Duke University School of Medicine, was the chairman of the task force that produced the DSM-IV. The opinions expressed are his own.)
To contact the writer of this article: Allen Frances at allenfrances@vzw.blackberry.net.

To contact the editor responsible for this article: Mary Duenwald at mduenwald@bloomberg.net.
Posted by dave traxson at 16:56