Professor Sir Simon Wessely, the president-elect of the Royal College of Psychiatrists - shares concerns about over diagnosis of childhood behavioural conditions and describes it as a, "Perfect Storm." COURTESY OF THE TIMES WEBSITE 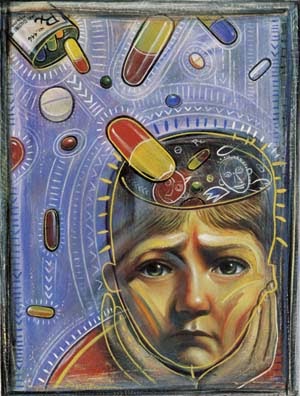 
Professor Sir Simon Wessely, the president-elect of the Royal College of Psychiatrists, yesterday made a timely and measured contribution to the debate over two trends that have come together. The first is the growing tendency to attach medical labels to human behaviour previously regarded as outside the medical remit. The second issue is that, as a consequence of such-and-such a condition or syndrome or disorder being identified, doctors then prescribe drugs in an effort to treat it.
The rich western world has, Sir Simon argues, become too keen — even dependent on or addicted to — the business of categorising every last foible, every crease and crinkle of an individual personality. Once a thesis, diagnosis and prognosis are advanced, the pharmaceutical industry is only too willing to conjure up the plausible chemical corrective, a product that health professionals are then only too willing to supply. Such a “medicalisation of normality”, as Sir Simon terms it and rightly says, is not a healthy development.
Sir Simon is right to argue too that, while his profession must bear some responsibility for the situation he describes, and doctors have become too willing to prescribe, the wider public cannot escape all blame. Parents — middle-class parents especially — are complicit. Unwilling to accept their child’s normal deviation from the tightly-drawn parameters of the normal personality, many parents lobby the relevant agencies for a medical explanation instead. It does not help that pupils and schools attract extra resources once certain conditions have been diagnosed. The idea that even minor problems must all have a cause and therefore a solution has become dominant.
The current fashion to label and try to treat aspects of human behaviour is not only unsustainably expensive, it may also prove injurious to the health of society as a whole. Many people who make hugely significant contributions to mankind’s well-being in adult life endured unusual, troubled, even harrowing childhoods. At a minimum, the talented are, almost by definition, in some way different from their fellows. Some people, especially during their early years, can act in ways that others — teachers, parents, peers — find eccentric, irksome, embarrassing, regrettable or just plain irritating. Some children are shy, naughty, obsessive or peculiar. Some are, sadly and with no obvious cause, unhappy.
That is not to say that suffering should not be alleviated. Any victim of a quirk of character sufficient to cause distress must be treated with kindness and sympathy, as well as being offered whatever encouragement, discipline, stimulation or other help they need as is judged appropriate.
What such individuals should not be subject to, however, is a pseudo-diagnosis that does little more than stigmatise the particular personality trait they happen to possess and which a prevailing majority view happens to deem unacceptable. Many conditions are created in the naming and the diagnosis often does no good at all.
Nor, other than as a last resort, should a child suffering no apparent physical ailment be routinely placed on long-term medication, whatever difficulty that child’s actions may create for those adults charged with his or her care. A chemical response may well be convenient but convenience seldom makes for the correct or the civilised course of action. Anxious parents and overzealous doctors are making a problem worse.
Posted by dave traxson at 17:18